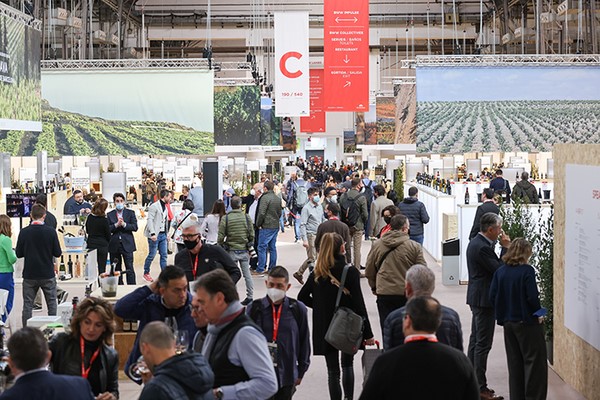 With more than 60 DOs on display, the fair will promote the plurality and territorial diversity of wine in Spain more than ever before.

Under the slogan Spain, a unique mosaic of soils, BWW 2023 will offer a programme of talks, tastings and food and wine pairings conducted by around a hundred renowned experts, who’ll highlight the great wealth of soils that make up the Spanish winegrowing territory. This geological diversity and the climate make Spain one of the countries with the greatest potential for wine production.

We should highlight the tasting that will bring together four Masters of Wine turned winemakers from different areas of Spain for the first time. These include Norrel Robertson, who’s been producing wines in Calatayud since 2003, Almudena Alberca, the first female Master of Wine in Spain and now a producer in La Rioja, Ribera del Duero and Valdeorras, and Fernando Mora, who owns vineyards in different parts of Aragón. Multi-award-winning sommeliers who have become winemakers will also take part in a joint tasting.

The tasting programme will be complemented by a dozen successful winemakers who work in other areas, including René Barbier and Álvaro Palacios, the architects of the revolution in El Priorat, Titín Palacios, who has terraced vineyards in El Bierzo, Esmeralda García, who works on the sandy soils of Santiuste (Segovia), Julia Casado, who seeks an emotional link between her wines and the terroir in Bullas (Murcia), Sara Pérez, a lover of the soils of El Priorat and El Montsant and the wines “that express their landscape”, César Saldaña, a visionary of the power of the chalky earth of Jerez, and Felipe Blanco, who’ll talk about the magic of the soils of the Canary Islands.

One highlight will be Luís Gutiérrez, the taster of Wine Advocate Robert Parker for Spain and author of the book titled Los nuevos viñadores (The New Winemakers), who’ll head a tasting of six great wines from six different soils produced by six renowned domestic winemakers.

Meanwhile, BWWHub will host talks, panel discussions and training sessions on the main future trends in the world of wine, including sustainability, innovation, digitisation and the internationalisation of wineries.

The next BWW will also display a firm commitment to enhancing the synergies between wine and haute cuisine, a great ambassador for the Spanish food industry abroad. Thus, in partnership with ICEX España Exportación e Inversiones, a round table will be held with renowned international restaurants with the international Restaurants from Spain gastronomic quality label. In addition, BWWGastronomy will showcase its pairings combining Spanish food and wine created for the occasion by leading chefs.

As for the exhibition area, BWW will be divided into two main sectors: BWW Lands, which will bring together the wineries organised by Designations of Origin and other quality seals, and BWW Groups&Complements, where wineries, groups, distributors and producer associations will meet companies offering equipment, accessories and services to the sector.

External projection and the internal market

In order to promote the international projection of Spanish wine, the fair intends to invite more than 500 key international buyers with the strategic involvement of ICEX Exportación e Inversiones. These purchasing decision-makers will come from the main importers of Spanish wine, including the United States, Germany, the Netherlands, Canada, the United Kingdom, Denmark, Colombia, Mexico, China, Hong Kong and Poland.

Spain is the world’s leading wine producer and the third largest exporter, according to the data provided by ICEX. In 2021, it exceeded €2,956 million in wine exports and was very close to its record. €3,006 million, reached in 2018.

Another of the major challenges for the sector is increasing domestic demand, which is why BWW 2023 will invite 1,300 key buyers from the domestic market (large-scale retail, wholesalers, specialised distributors, retailers and gourmet stores). A total of more than 8,000 business meetings between the fair’s exhibitors and professional buyers are expected to take place.

The most recent BWW in April 2022 brought together more than 650 exhibiting companies, 60 Spanish Protected Designations of Origin (PDOs) and over 18,000 professional visitors. These included 470 major international buyers from strategic markets, who participated in more than 6,600 business meetings with the exhibiting companies.